In this post on Gambling and Expected Value, we look at the "Ontario 49" lottery offered by the OLG.
Click here to find similar posts on other lotteries and games of chance.

Ontario 49 is a lottery offered by the Ontario Lottery and Gaming Corporation (OLG).

There are 7 different ways to win a prize playing Ontario 49, ranging from a free ticket in a future draw to $2,000,000. The first and second prizes are capped to a total of $2,000,000 and $50,000 respectively, meaning that if there are multiple winners, the prize gets split between them.

There are 13,983,816 unique combinations of six numbers that can be chosen from the numbers 1 to 49. That number of combinations of items you can choose from a set without repetition is calculated using the following formula:

where k is the number of items chosen, n is the total number of item to choose from, and ! denotes the factorial function. In this case, n = 49 and k = 6.

The probability of matching some number of the winning 6 can be calculated from the hypergeometric distribution. The formula looks like this:

The second prize adds a complication because of the bonus number. The formula to calculate the probability of matching r out of k winning numbers plus a bonus number (also drawn from the pool of n numbers) is a slight modification of Equation 1:


Here is a table summarizing Ontario 49's payouts and their probabilities: 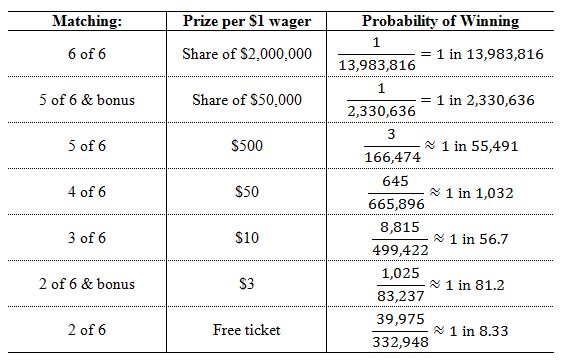 The last thing we need is the probability that your wager is just money thrown away. That's 100% minus the total of probabilities of winning the prizes in the table above, which works out to exactly 70,662,652,981/83,230,673,988 (about 84.9%). This means that an Ontario 49 number combination has about 15.1% chance of not losing. However, keep in mind most of those "winners" are just getting a free play in a future draw, which as you'll see in the expected value section, is almost worthless.

The precise expected value is a little tricky because the payout on the top two prizes depends on how many winners there were, and the value of a free play is actually significantly less than the cost of the play. Let's first start by calculating the contribution to the expected value coming from the guaranteed prize amounts. Each contribution is simply the net gain (prize minus wager) multiplied by the probability.

Next we have to figure out how much the top two prizes contribute to expected value. That depends on how many winners there are. We don't know how many winners there are, but if we know how many combinations are played, we can estimate how likely there are to be 0, 1, 2, etc. winners. This is calculated using the binomial distribution. If the probability of winning the prize is p, the probability of not winning the prize is (1-p), and N combinations are played, then probability of there being s winners of the shared pot is:

What do we need this for? Well, because the prize depends on the number of winners and the number of winners is a probabilistic function of the number of tickets sold. Therefore, we need to estimate an expected value of the prize. I've estimated that the number of combinations played in each Ontario 49 draw is on the order of 750,000. Accordingly, I've estimated the expected top prize based on there being up to 7 winners (more than 7 winners is too unlikely to be worth consideration). I've also checked N = 250,000 and N = 2,500,000 to show that the final result is not that sensitive to the accuracy of my estimate of N.

Working through the same process for the second prize, this time considering up to 10 winners because the likelihood of multiple second prize winners is higher, we get the following table:


You can see from the difference between N = 750,000 and N = 2,500,000 that the expected payout for the second prize is little more sensitive to the accuracy of my estimate of N. But it is not excessively sensitive, so our estimate is probably still pretty close to correct.

Finally, we need to estimate the value of a free ticket. Start by taking the expected value of free ticket. It's the sum of the products of each prize and the likelihood of winning. Let's consider only the monetary prizes first.

We could sum the first few terms until it converges, but it this case we have a very simple closed-form solution, shown below:

So winning a free ticket is equivalent to receiving a cash prize of about 49.4 cents.

Putting everything together now, the expected value of a single Ontario 49 play is 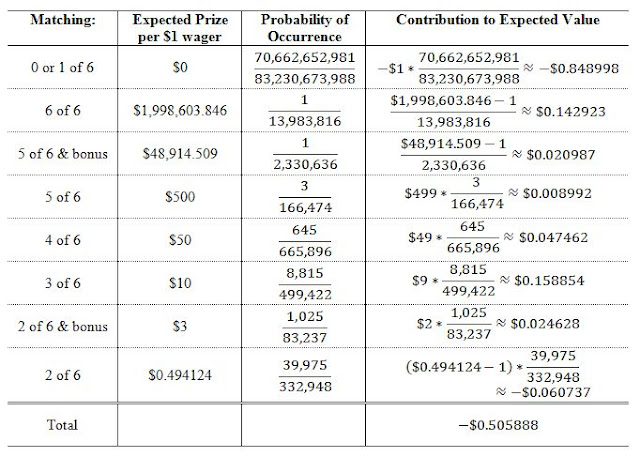 This means that, on average, for every dollar you spend playing Ontario 49, the OLG keeps about 50.6 cents for themselves.