A beer bong is a very simple device, composed of a funnel and a tube, designed to quickly get beer into the user. While you could go out and buy one, it'd be a pretty big waste of money considering how cheaply and easily you could build your own. Of course, if you do build your own, you're going to want to know a few specs so you can answer all your friends' questions, like "how much beer does it hold?" and "how fast does the beer come out?"

where D and L are the diameter and length of the cylinder, respectively. The conical part of the funnel is a cone with the tip cut off, known as a conical frustum. The volume of a conical frustum is:

where L is the height of the frustum and D1 and D2 are the two end diameters. So, defining our beer bong geometry as in the figure below

the volume of beer in the beer bong is calculated as

where the D's and L's are in centimetres and V is in millilitres. If your funnel doesn't have a "hopper" portion, Lfh = 0. Divide V by 341 mL/bottle if you want to know how many bottles the full beer bong is equivalent to.

If you prefer US Customary units, use this formula instead:

where the D's and L's are in inches and V is in US fluid ounces.

So that's the answer to "how much beer does it hold?" Now for some fluid mechanics to calculate the beer velocity. We're just going to calculate the initial velocity, which is when the beer flows fastest. As the beer drains, the flow rate slows down. We start with the energy equation for fluid flow, which is

where the subscripts 1 and 2 represent two points along the flow path, u is the flow velocity (we already used V for volume), g is the acceleration due to gravity (= 9.807 m/s² = 32.18 ft/s²), z is the height above some arbitrary reference point, p is the static fluid pressure, ɣ is the fluid's specific weight, α is the kinetic energy correction factor, and hL1-2 is the loss of hydraulic head from from point 1 to point 2.

For the beer bong, we're interested in the exit velocity, so we'll make the end of the hose point 2. We'll make the surface of the beer in the funnel point 1. Both point 1 and point 2 are exposed to atmosphere, so we can take p1 and p2 to be equal and they cancel out of the equation. Because the reference point for z is arbitrary, we can choose the exit from the beer bong to be the reference point, making z2 equal to zero. 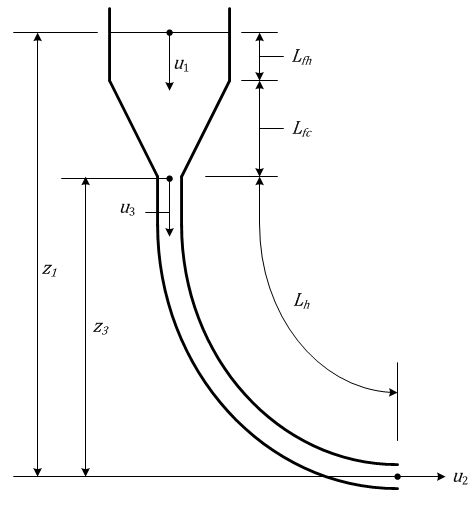 According to the law of conservation of mass for incompressible fluids, the flow rate (unit volume per unit time) of the beer must be constant. We can use this to relate u1 to u2. 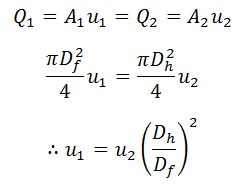 We can measure z1, it's just how high the surface of the beer is above the end of the hose. If the hose is fully straightened, z1 is maximized, equal to Lfh + Lfc + Lh. Now if you want to use an easy approximation, you can assume that the head losses are negligible and the energy correction factors are both equal to 1.0. With these assumptions we can solve for the exit velocity directly 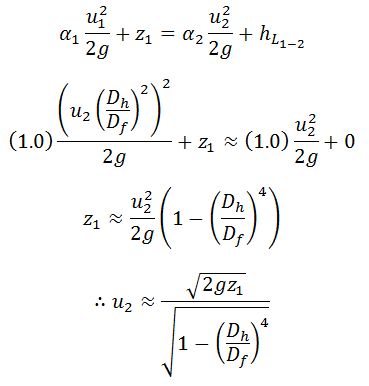 We can make this approximation even easier by assuming the funnel diameter is much larger than the hose diameter (which is probably true), making the denominator of the above velocity expression very nearly 1.0, and the exit velocity is simply

As you'll see later in an example, ignoring energy losses isn't going to give you a very accurate answer, and your friends aren't going to accept some lousy ballpark estimate. So the math's going to get more intense, but I paid good money for my fluid mechanics course in university and I'll be damned if I don't find a way to put that knowledge to use.

It's safe to assume turbulent flow in the hose, and although the beer is moving much more slowly in the funnel, it's probably also in the turbulent flow regime. The kinetic energy correction factor varies depending on fluid velocity, viscosity, and pipe roughness, but a typical number is about 1.05. I'm going to assume α1 = α2 = 1.05.

Where u is the flow velocity leaving the contraction and k is an empirical factor that depends on the shape of the contraction. For typical funnel geometry, k should be around 0.07 to 0.08. I'll use 0.08. We can define a third point on the flow path, the exit of the funnel/entrance to the hose, but we won't need to do much with it. Since we've already assumed the funnel exit has the same diameter as the hose, the velocity at point 3 must be equal to the velocity at point 2 in order to satisfy the mass conservation law. Therefore, the head loss from point 1 to point 3 is

where f is the Darcy friction factor, L is the pipe length, D is the pipe diameter, and u is the flow velocity in the pipe. For our beer bong, the head loss from point 3 to point 2 is

Now things start to get more complicated. The friction factor is an empirical value that's a function of the pipe roughness, diameter, flow velocity, and fluid viscosity. But your beer bong's probably going to be made with smooth plastic or rubber hose, so we can assume a perfectly smooth pipe (i.e. ignore pipe roughness). If you're doing something crazy like using cast iron or bamboo or hollowed out whalebone, you might want to consider the pipe roughness.

where Re is the Reynolds number, which for the beer bong hose is equal to

Since we still don't know what u2 is yet, we have iterations upon iterations on our hands here. Good thing Excel can do all that for you. But if you want to solve it by hand you could cut down on your iterations by using Haaland's approximation of the Colebrook equation.

You could also use the approximate value of u2 to calculate the friction factor. It should get you a friction factor that's fairly close to the "exact" solution, so we can create a beastly-looking equation for u2 that will get pretty close to the same answer as the iterative solution from Excel. 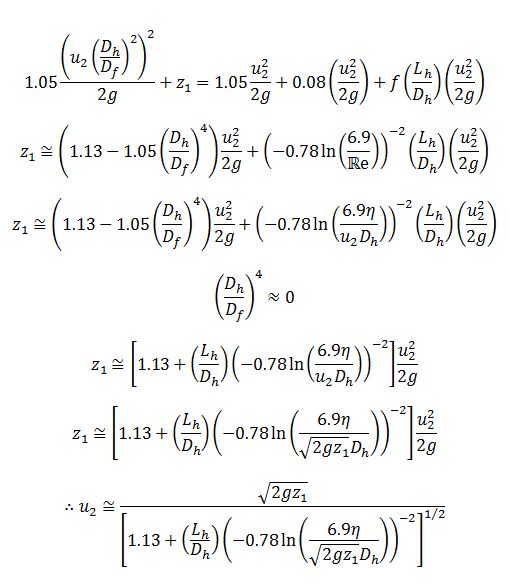 where L, z, and the D's are in centimetres so that u2 comes out in cm/s.

Let's do an example based on a hypothetical beer bong with some clever name like The Brain Cell Slayer, depicted in the figure below. 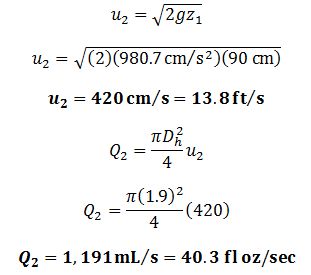 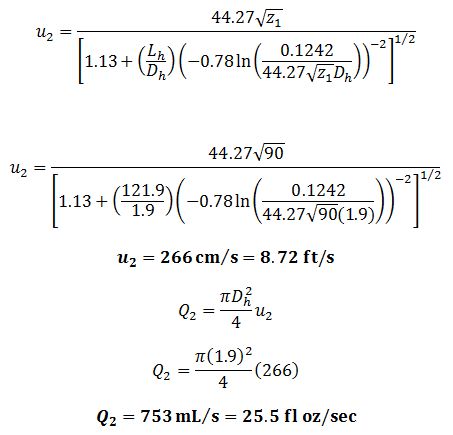 Even though it's a smooth hose, friction has a pretty significant effect in this example, reducing the initial velocity of the beer by almost 40%. And just so you can see that our beastly-looking equation really does get you close to the "exact" iterative solution, here's what I get from Excel using the Colebrook equation for the friction factor: