In this post on Gambling and Expected Value, we look at the "Encore" lottery offered by the OLG.
Click here to find similar posts on other lotteries and games of chance.

Encore is a lottery offered by the Ontario Lottery and Gaming Corporation (OLG).

Encore is an add-on lottery you can play if you are already playing another lottery (Lotto 649, Lotto Max, Lottario, Ontario 49, Pick 2, Pick 3, Pick 4, or Daily Keno).The player chooses how many wagers he or she wishes to make (you can choose to play 1 to 10 combinations per ticket). The player doesn't get to choose their numbers though; a random string of seven digits (from 0 to 9) is chosen for him for each play. Winnings are determined by matching particular digits in the sequence.

There are 22 different ways to win a prize playing Encore, ranging from $2 to $1,000,000 on a $1 wager. Figuring out their respective probabilities isn't too difficult, but does require some care to avoid overcounting. I've made the table below to help you see how to calculate how many possible sequences of numbers could win a particular prize. 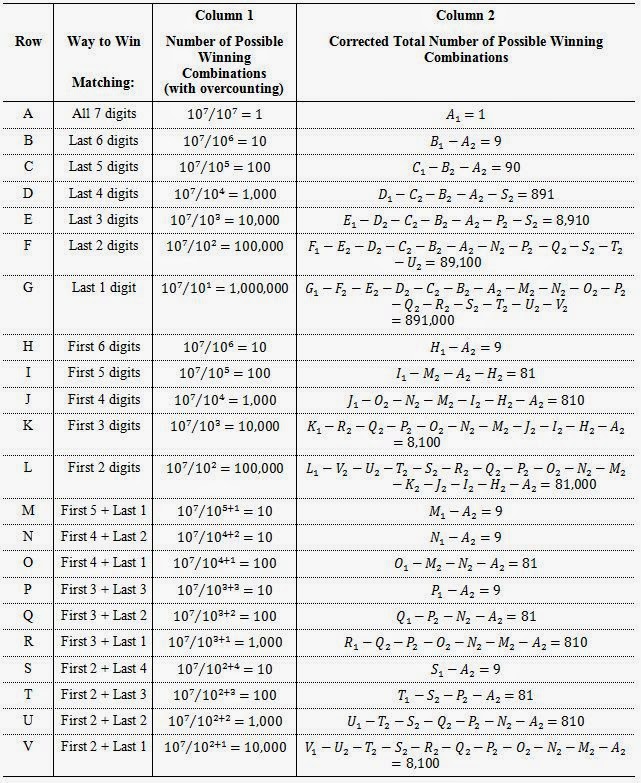 Since the sequence consists of 7 randomly selected digits that can be repeated, there are a total of 10,000,000 (10 raised to the 7th power) possible number combinations that can be played. The probability of winning a particular prize is the number of ways to get a match divided by the total number of possible plays. For instance, the probability of winning the prize for matching only the last 4 digits is 891 divided by 10,000,000 (i.e. 0.00891%, or approximately 1 in 11,223). The table below shows the payout and the likelihood of winning for each of the 22 ways a player can win at Encore. 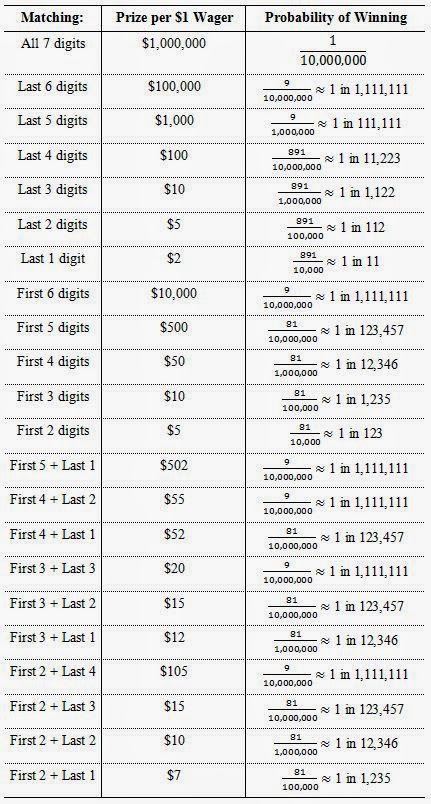 Something you should note looking at the table of payouts and probabilities is that the prize doesn't consistently scale to the probability of occurrence. For instance, matching the First 2 and Last 4 digits has the same probability of matching the Last 6 digits, but the former pays only about 0.1% as much as the latter.