Analysis of Price Inflation of Alcoholic Beverages in Canada

I enjoy indulging in beer, wine, or scotch once in a while. But drinking alcohol's an expensive habit, even if you're just drinking the cheapest available beer on the market. It's been almost 9 years now since I bought my first drink, which got me thinking about how the price of booze has changed over time. First, I realized that reminiscing about how much I once could buy with my dollar is something old people like to talk about with their children and grandchildren. But then I got past the harsh reality that I am beginning to think like an old man and searched for the data. Statistics Canada has been interested in the month-to-month changes in the price of alcohol for years. The data's available here.

Let's start with the national average. I took the price indices published by Statistics Canada, normalized them to September 1978, and then plotted the graph below. The graph shows how much $1 worth of beer, wine, or liquor in 1978 has increased in price over time.

What's interesting is that beer prices have increased at a significantly higher rate than wine or liquor. There was also a period there from the mid-1990's to the mid-2000's where the inflation of the price of beer bought at the liquor store was much higher than for other alcohol bought anywhere or for beer bought at the bar. That's since tapered off and now the inflation for beer prices is about equal for bars and liquor stores.

What's also interesting is that the rate of inflation of the price of liquor at the store is comparatively low, even lower than the Consumer Price Index (CPI). You can think of the national CPI as the average inflation for stuff the average Canadian typically spends his or her money on. It's a weighted average of all the stuff you spend money on: food, clothes, gasoline, rent/mortgage, etc.

Basically, compared to 1978, the price of beer has inflated much faster than the CPI while liquor at the liquor store has been maintaining below average inflation.

Okay, that's fine, but if you're a consumer of alcohol in Canada, you're probably well aware that the same drink in Quebec costs significantly more in Alberta. So how do the provinces compare to each other? Statistics Canada does have some data sorted by province, but not the "served" alcohol stats. But we can at least look at how the value of a dollar spent at the liquor store has changed. 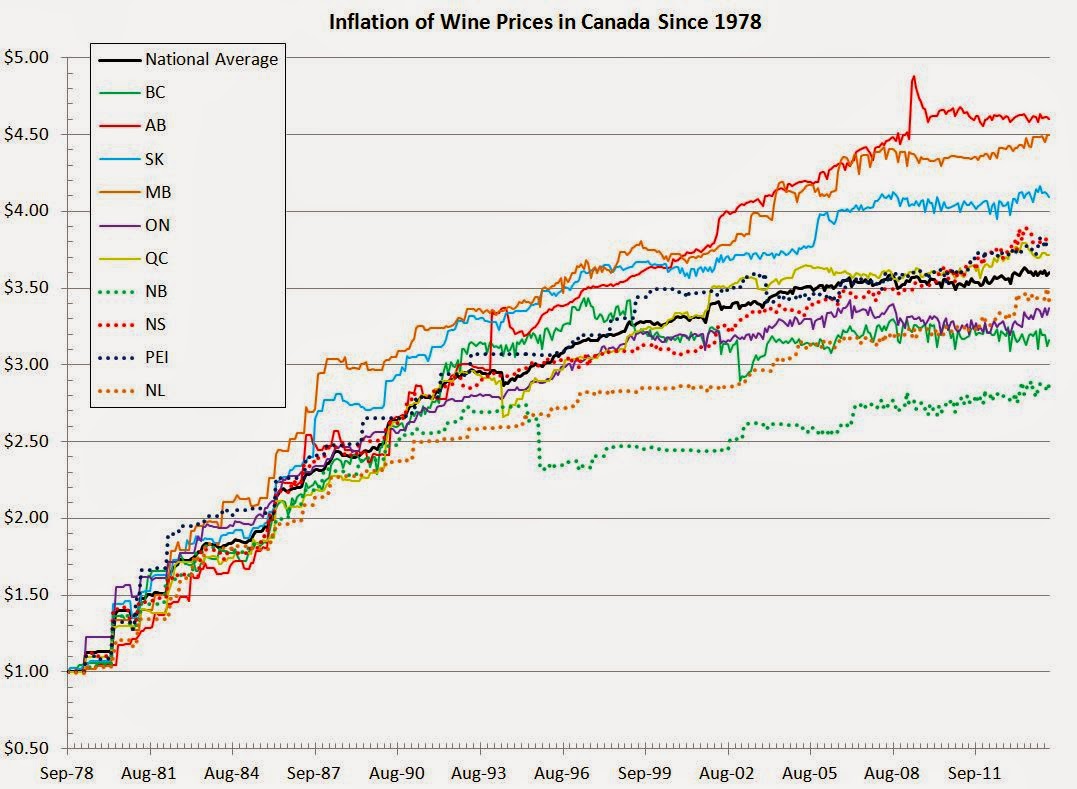 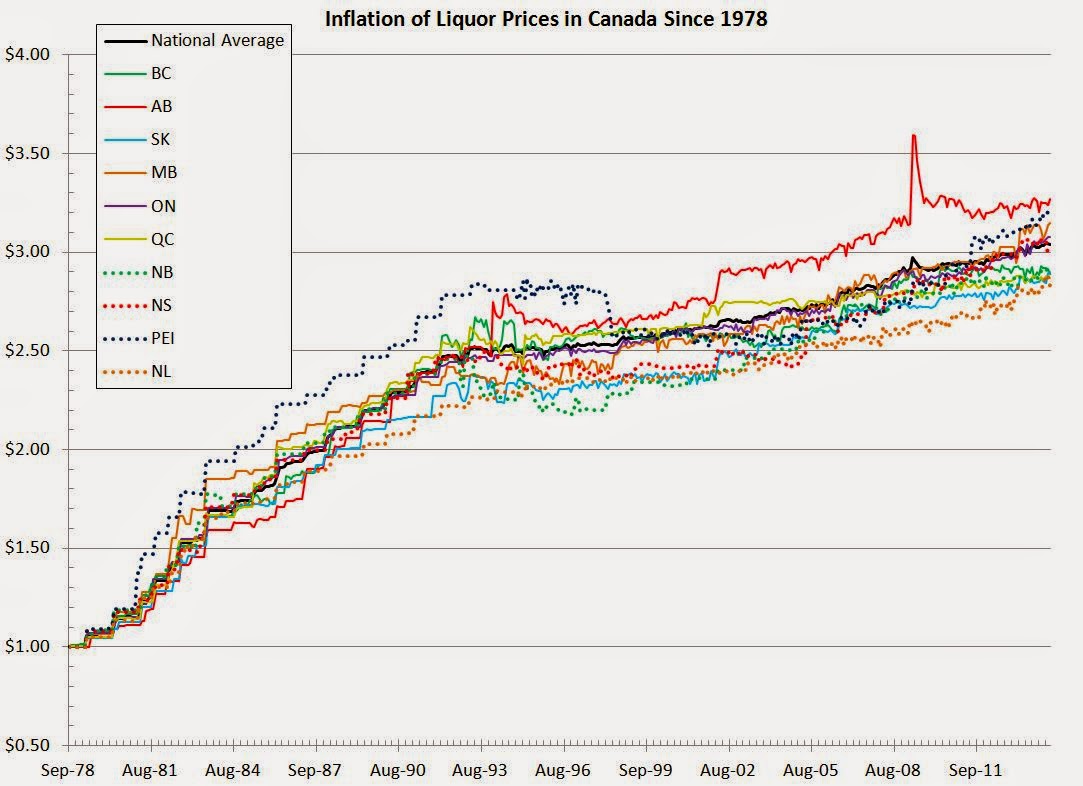 
As you can probably see, Alberta has experienced the highest inflation in both alcohol prices and the CPI since 1978. The most significant inflation; however, was in beer prices. Interestingly, the prairie provinces have all experienced relatively high inflation in the price of beer. I haven't looked into why that might be, but perhaps is has to do with the price of the raw ingredients, which are typically grown in the prairies. I think it's also interesting that the basic trend in each province is the same. Beer prices have inflated more than wine or liquor prices in every province and have inflated at a rate ahead of the CPI. Liquor prices have also inflated at lower rates than beer and wine in every province, except in New Brunswick where wine just barely beat liquor. Liquor prices have also inflated at a rate below the CPI in every province. What all this means is drinking beer has gotten comparatively less affordable everywhere in Canada since 1978. Meanwhile, drinking liquor has gotten comparatively more affordable. To borrow part of a Corb Lund lyric, I guess it's time to switch to whiskey. 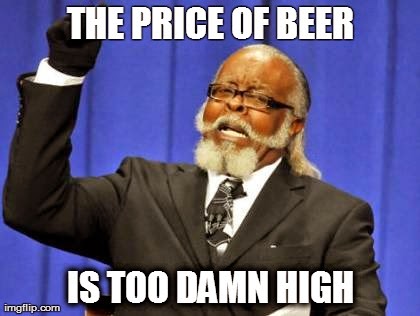