In this post on Gambling and Expected Value, we look at 50/50 draws.
Click here to find similar posts on other lotteries and games of chance.


How the Game Works

Players purchase tickets and their money goes into a prize pool. The prize pool is equal to 50% of the total ticket revenue. The other half of the revenue goes to whoever coordinated the draw. One ticket is drawn and the matching ticket holder wins the jackpot. 50/50 draws are often held at fundraiser events (half of the revenue goes to support some cause and half goes to the jackpot winner).

Let's say a ticket costs C dollars and N tickets are sold. The prize is equal to 0.5*C*N and each ticket has a 1/N chance of winning.

Simple enough. But what happens when there's a multi-ticket discount available? It is often the case that as an incentive to sell more tickets, a lower unit price is set if you buy a larger number of tickets. For example, $2 each or 3 for $5. Won't that mess around with the formulas above? Well, yes, a little bit.

and the total ticket revenue is:

The prize pool is half of the ticket revenue:

and the probability of any ticket being drawn is:

The table below gives the prize pool for different values of α and β per 1,000 total tickets sold:

Because α is between 0 and 1 and β is non-negative, we can conclude that EV1 is negative for all values of α and β. In fact, we could go step further and show that it is always between -0.5*C1 and -C1.

Moving on to the expected value of a ticket bought at C2:

EV2 is interesting because it is not necessarily always negative like EV1. If the person setting the ticket prices doesn't know any better, he or she might choose α < 0.5, in which case EV2 could potentially be positive, a dream come true for the intelligent gambler. It can be shown that EV2 is bounded between -0.5*C1 and +0.5*C1.

Well a positive expected value sounds pretty good, but we need to look further. Under what conditions are we getting the maximum expected value? The partial derivatives of EV2 will tell us.

So far there's been a lot of math and no pretty pictures, so here are the expected values EV1 and EV2 plotted at different values of α and β:

As you can see from the plot, both EV1 and EV2 decrease as β increases, and both approach -0.50 as α approaches 1.0 (which makes sense because α = 1 is the simple case where there's a single ticket price). Both EV1 and EV2 are per $1 of ticket price C1. In the graph I normalized both expected values by dividing by C1 because at allows for all 9 of the plotted curves to be resolved for a larger range of β. Furthermore, EV2/C2 = 0/0 for all values of β if α = 0. That isn't very informative and can't be plotted. However, we ought to be comparing EV1/C1 to EV2/C2, as shown in the plot and tables below: 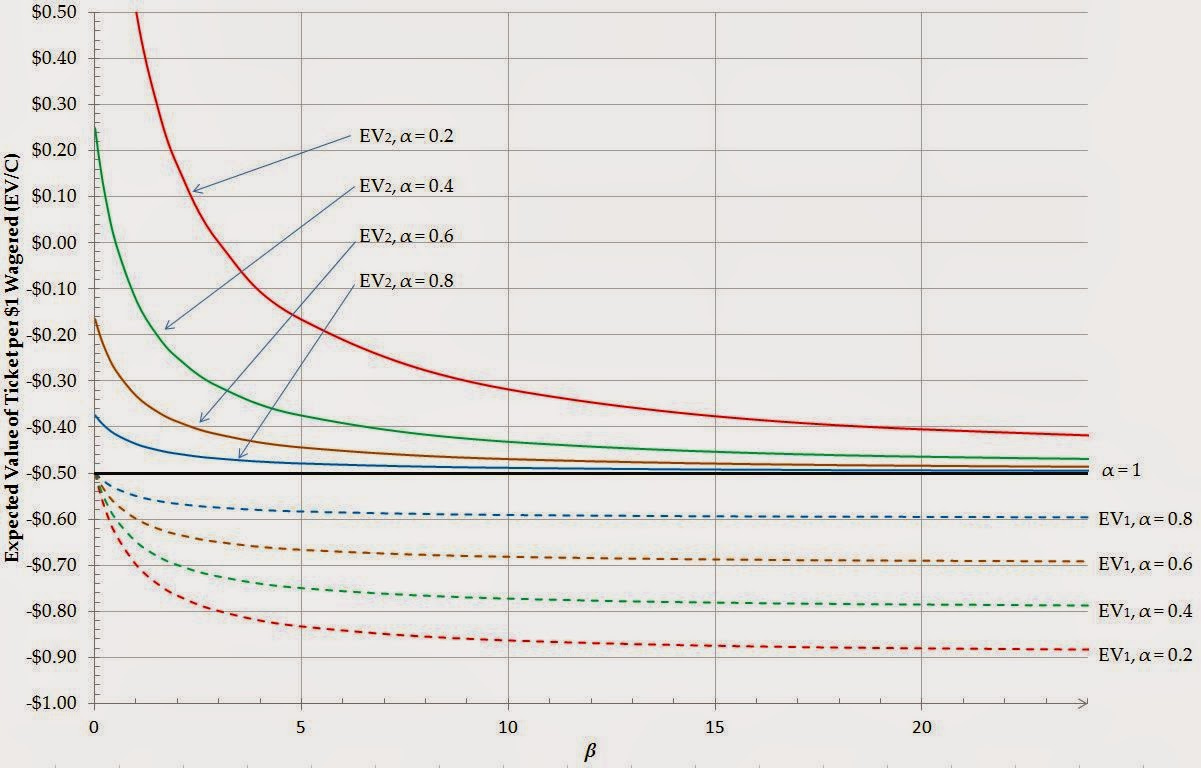 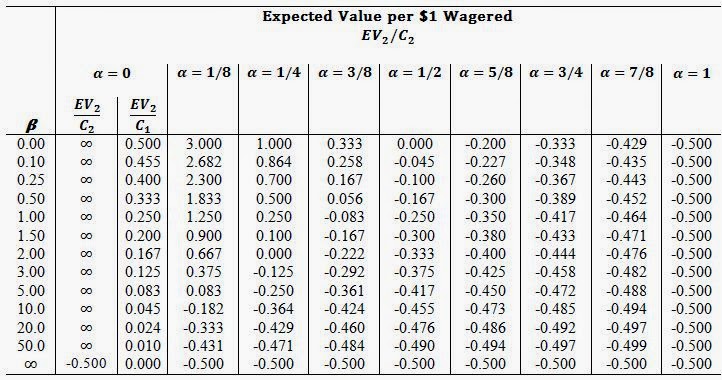 Now what does all this math mean to someone in the real world? Technically, a positive expected value is possible for a ticket purchased at C2, but only under unrealistic conditions. β must be less than 1/α - 2, but greater than zero (β < 0 makes no physical sense).

EV2 is maximized when both α and β = 0, meaning the cheaper tickets were free and none were bought. Extremely unlikely. Obviously, the whole point of setting a lower price point is to sell more tickets, hopefully generating more revenue overall because of an increased volume of sales. That means trying to set a lower price that is low enough to create the incentive to buy more tickets, but still high enough to generate appreciable revenue. The gamblers buying the cheaper tickets cause β to increase, which causes EV2 (and EV1) to decrease. Since the organizer doesn't want to discount tickets too steeply and cheaper tickets look more attractive to gamblers (because you can afford more of them to increase your chance of winning), a situation where both α and β are small enough to keep EV2 positive is unlikely.