The Surprising Probability of Shared Birthdays

Have you ever wondered why, in a group of maybe a few dozen people (say a class of students or the staff in an office), it is fairly common for there to be a shared birthday? There are 365 days in a year but only 20 to 30 people in a typical elementary school classroom. Commonsense says shared birthdays in a small group ought to be rare, right?

When it comes to understanding probability and randomness, our commonsense often leads us astray. Our brains are better suited at comprehending patterns, structure, and order, so much so that when faced with chaos and randomness we tend to search for patterns and attempt to impose order. Our belief of what a random sample should look like is often not very random at all. So when we have a group of 20 random people, we'd like to believe that their birthdays should be evenly distributed throughout the year.

Let's analyze the shared birthday problem and find out how probable shared birthdays really are. First off, what are the chances that two randomly selected people have the same birthday? This is a rather straightforward problem, assuming that birthdays are evenly distributed among the 365 calendar days (let's neglect those leap-year birthdays). The probability is 1/365 (about 0.27%). Nothing counter-intuitive about that; our gut feeling should be that it's unusual for two random people to have the same birthday.

We can calculate the probability of there being a shared birthday in any size of random sample using the following complicated-looking equation:
where n is the number of randomly selected people in the group and the ! indicates the factorial function. The probability of a shared birthday rapidly approaches 100% because that 365^n factor in the denominator makes that whole fraction really small really fast as n increases. You can see for yourself if you plot the equation at different value of n like I have below:
Looking at it in a slightly different way, we can show what's the minimum size of group you need to have for a given chance of there being a shared birthday: 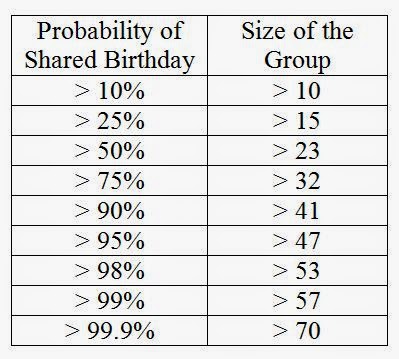