Olympic Champions vs. the Average Joe in Track & Field

Bill Murray tweeted that every Olympic event should include an average person competing for reference, so I decided to try and find out what that might look like (at least for the track and field events).

Track and field results that I could use to determine the abilities of a truly average person don't really exist. Publicly available results for most events are typically for skilled athletes, while a large percentage of the North American population lives a sedentary lifestyle and is overweight. Most people don't go down to the track and crank out a 400 m just to see how fast they can do it. But we can look at lower levels of competition for results that are at least closer to an average person's abilities.

I looked at all of the competition results for the senior boys events at the HWIAC track & field meets between 2013 and 2016. This is a city-wide track meet for Hamilton, Ontario. Schools are limited in the number of athletes they can enter in each event, but there are no minimum qualifying standards. There's still obvious selection bias here because the participants presumably all have some aptitude for the events they compete in. The typical participant at the HWIAC meet is probably a better athlete than most people, but still not an exceptionally good athlete. The competitors are aged 16 to 18, so their muscles haven't fully developed yet either.

I took the best, average, and worst results from 2013 to 2016 and compared them to the 2016 Olympic gold medalists. There is no doubt that the best result is significantly better than the average person. The average HWIAC participant is also very likely to be better than the average person. Even the worst result is probably better than the average in most of the events, but I'm not confident it was better than average in all of events (the long jump result looks pretty low). I added my own personal bests as well because at one time or another I've tried most of the events at least once. For a few other events I was able to come up with reasonable estimates based on races of a comparable distance. A table comparing the various results is provided below. 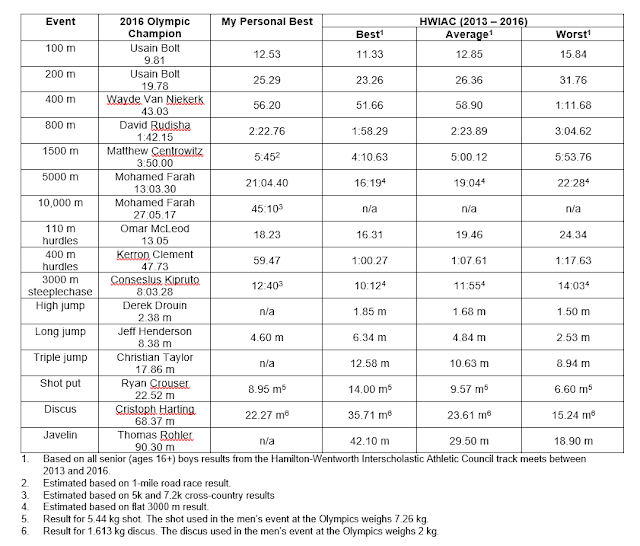 By simply comparing the numbers in the table you can see the Olympic gold medalists are way better than typical high school athletes. But just looking at the pure numbers might not be enough to appreciate how weak average is compared to Olympic champion. What would all these results actually look like in a competition? Just check out these scale diagrams I've prepared to find out: 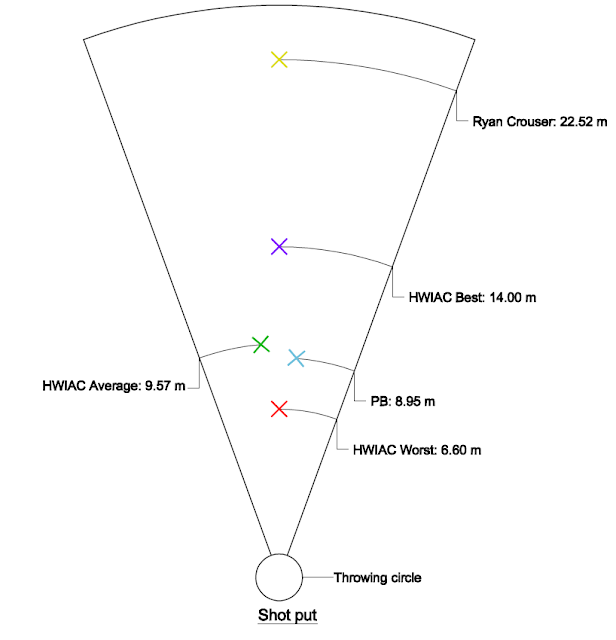 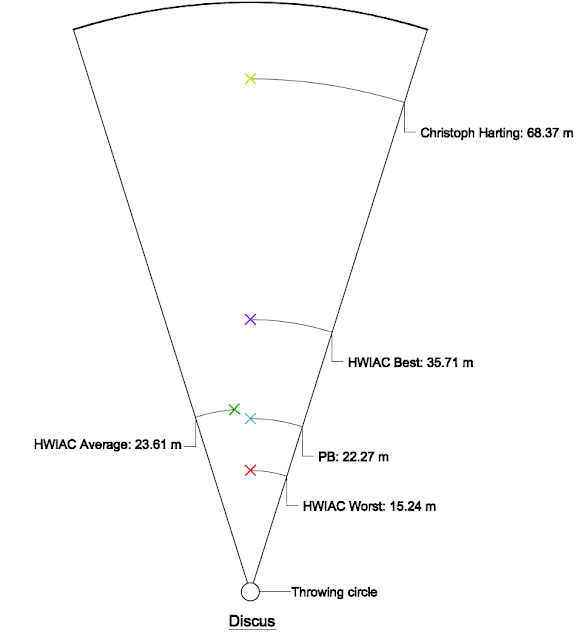 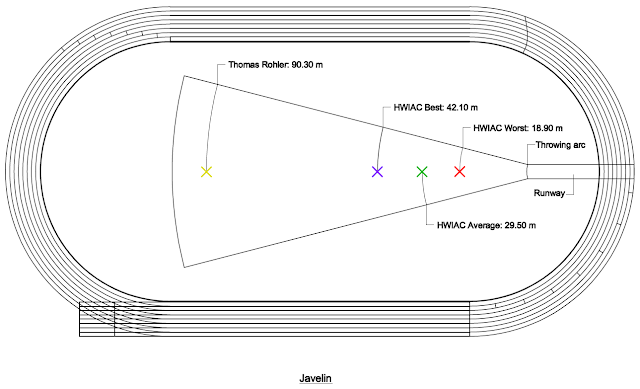 
The track is a 400 m oval, so for the events 400 m and shorter, we can visualize the results by estimating where the competitors would be on the track when the gold medalist finished the race. 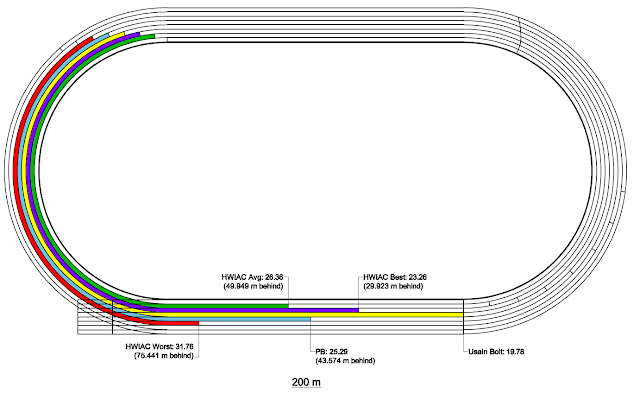 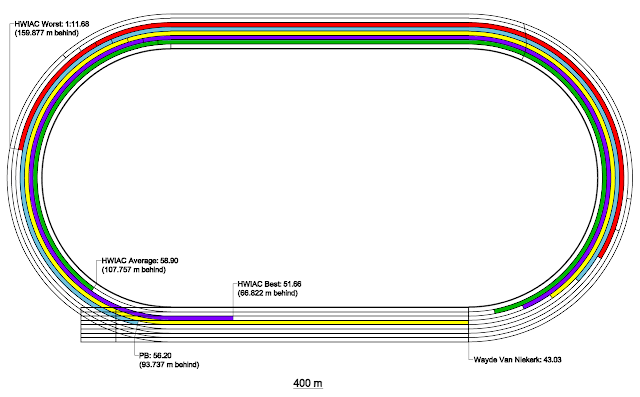 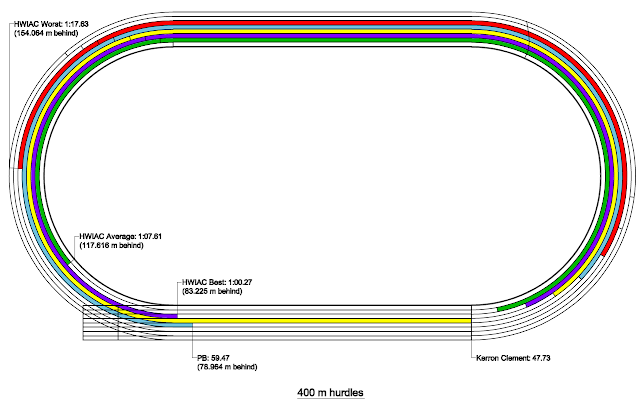 Visualizing the results of the longer races on the same track is more difficult because the gold medalist would end up lapping or nearly lapping our slower benchmarks (even in the 800 m, the worst HWIAC result between 2013 and 2016 would've been almost an entire lap behind David Rudisha). 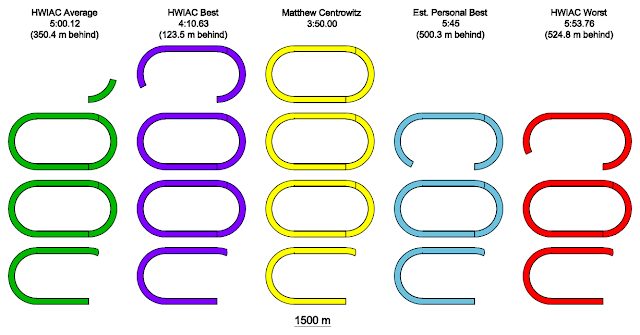 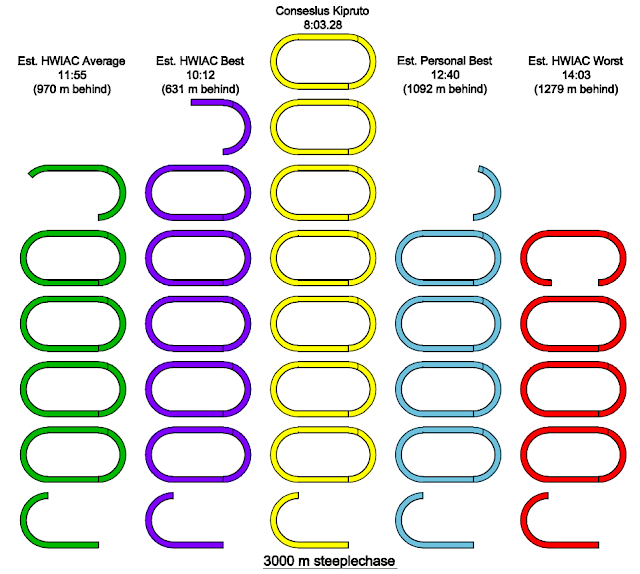 It looks like the Olympic champions are about 1.5 to 1.9 times faster than average, assuming the worst HWIAC result from 2013 through 2016 is close to the average. It's worth noting that the men's 1500 m race at the 2016 Olympics was relatively slow (more than 20 seconds, or 10%, slower than the world record time). Probably a fair bit slower than what the field was capable of in that race, so only 1.5 times faster than average is pretty optimistic for the average people. 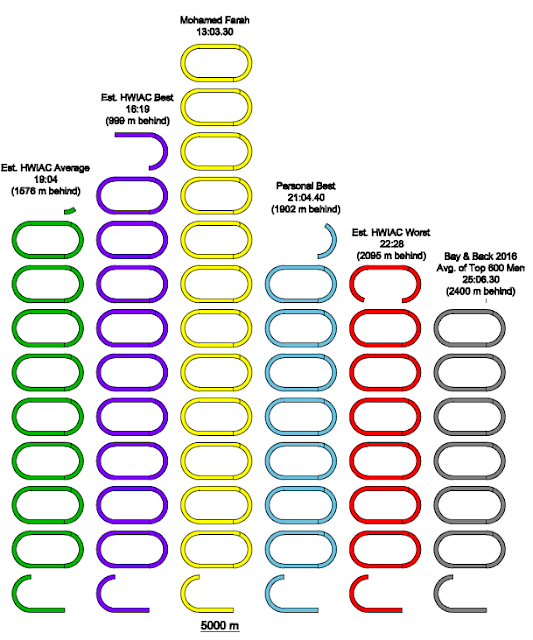 In summary, as a rough approximation, it is probably safe to say Olympic champions can run twice as fast, jump twice as far or high, and throw four times as far as the average person. If average running speed is likened to typical traffic speed limits in cities and towns, then Olympian running speed would be like typical expressway speed limits. The greater difference for the throwing events probably has to do with throwing technique. The average person is much more practiced in running and jumping than in throwing javelin or discus, so there's a greater difference between the average person and the Olympic champion in the throwing events.
Posted by alohonyai at 15:14