Construction terminology can be confusing, especially where masonry is concerned. Many terms unique to masonry construction can leave laypeople scratching their heads. In this post, we make sense of some of the terminology used within the masonry industry.

Hollow blocks are typically laid as stretchers, occasionally as headers, and should never be laid as sailors or shiners. Solid bricks are also typically laid as stretchers, but headers, rowlocks, and soldiers are also pretty common, especially in older buildings. Sailors and shiners are rare in solid brick masonry, but have been used in the past to produce some interesting brickwork patterns. Masonry is strongest when loaded as a stretcher or header, so rowlocks, soldiers, sailors, and shiners are typically used for decorative purposes where the strength demand is low. 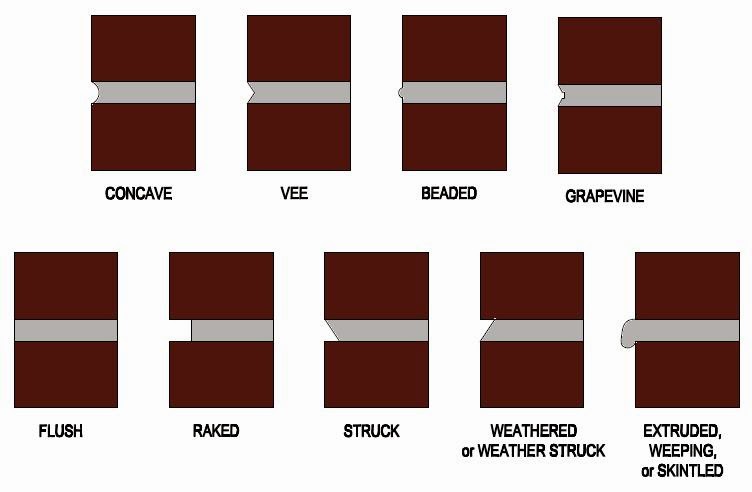 The most common joints are concave joints (occasionally called bucket handle joints), which provide a finished look without negatively affecting the overall strength or ability to manage moisture. Flush joints work well for masonry that will be coated with parging or plaster because flush joints aren’t as likely to show through the coating as it ages. Raked joints are made by raking out some of the mortar before it hardens. This emphasizes the edges of the units and can create a good aesthetic. However, raked joints are generally weaker and more susceptible to moisture intrusion than most other joints. Extruded joints, also known as weeping joints and occasionally called skintled joints, are really just unfinished joints. The extrusion is formed from mortar that’s squeezed out of the joint when the brick is laid in place. Some people like extruded joints, claiming they give the brickwork a rustic look, while others feel extruded joints just look messy and unprofessional.

We looked at some of the different terminology used within the masonry industry, including the six orientations of a brick and nine different ways to finish mortar joints. In a follow-up post we will take a closer look at some of the many different patterns masonry can be constructed in.