I was disappointed that Tailor4Less offers samples of most of their suit and coat fabrics, but not their shirt fabrics. I ordered seven suit fabric samples on 30 January 2013. They arrived about a week later. The samples I ordered were: 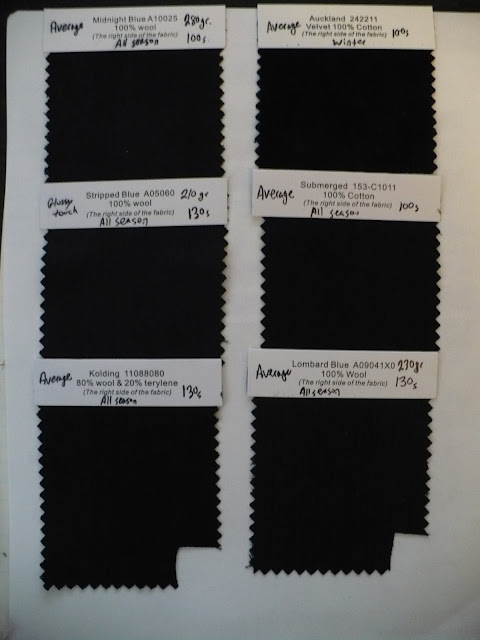 The "Submerged" fabric was a few shades darker than the website suggested. Unfortunately, I can't show you what it looked like on the website because T4L stopped offering this fabric at some point between when I ordered the sample and when I began writing this blog post. Perhaps that's a good thing. If you continue reading, you'll see that "Submerged" was a rather underwhelming fabric.

I wrote down details from the website on the labels that came attached to the samples. Fabric brightness was either "average" or "glossy touch". The glossy touch fabric was shinier than the others, so that description seems reasonable. You'll just have to believe me that it's shinier. I'm not much of a photographer and my camera's pretty old. Here is the first photo again, but taken with much more light: 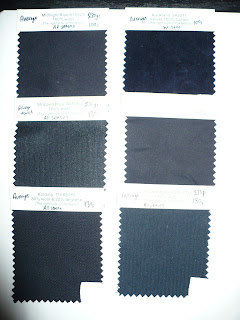 I have no way of verifying the S numbers since I can't measure the thickness of the fibres. By the way, S numbers apply only to wool or blends containing at least 45% wool. T4L still described the two cotton fabrics as 100s.

Fabric weights in g/m² were given for only three of the fabrics. I don't have access to anything that can measure small weights accurately, so I can't verify the weights by anything other than how the samples feel between my fingers. "Stripped Blue" felt lightest followed by "Kolding". "Auckland" was velvet and easily felt heaviest, followed by "Midnight Blue". By no means an accurate test, but at least it's consistent with the website's descriptions. The fabrics also felt pretty thin, which is consistent with their low-weights.

The "season" is supposed to give an indication of how warm the fabric will keep you. Winter and summer are self explanatory. All-season (a.k.a. three-season) is supposed to be meant for spring, fall, and cooler periods of summer in the North or warmer periods of winter in the South. I think that their idea of a "Winter" or "All season" fabric probably applies to Shanghai or Barcelona (where T4L appears to have offices). The heaviest reported fabric weight of 280 g/m² (8.3 oz/yd²) is still pretty light and probably isn't warm enough for spring or fall in most of Canada or the northern States. 340 g/m² (10 oz/yd²) is probably the lightest I would consider for a three-season fabric in Canada. The thin, light fabrics I got from T4L are practically tropical wools. They look fine, but you'll probably feel cold even in mildly cool weather around here.

Apart from being lightweight, most of the fabrics looked and felt fine. That is to say they felt adequate, reasonable for a bargain suit, etc. Nothing felt luxurious, but then I had no expectations of luxury from a company that has "4less" in its name. The only fabric I thought wasn't acceptable was "Submerged", which felt stiff and coarse. I have $20 cotton dress shirts that feel much nicer. I pinched and crumpled the fabrics to get an idea of their wrinkle-resistance. Wool has some natural wrinkle-resistance. Terylene (a type of polyester) is also wrinkle-resistant. Cotton is more prone to wrinkling than wool, but some cotton fabrics today have reasonable wrinkle resistance too. Once again, "Submerged" was the poorest performer, wrinkling very easily. The wool and wool blend fabrics had good wrinkle resistance, and the other cotton fabric, "Auckland", also did pretty well.

To check if the fabric compositions on the labels were true, I conducted a burn test. Cotton smells like burning paper when it burns, burns with a fairly steady flame, and leaves behind a soft, grey ash. Wool smells like burning hair (though the sulfur odour isn't so strong), burns with a flickering flame, and leaves behind a hard, brittle, black ash. The polyester here is present only as part of a wool blend, so I was looking for melting because the other burn characteristics (odour and ash) of the material would be masked. All of the fabrics burned as expected, so I have no reason to believe T4L is lying about the kinds of fibres in their fabrics.

The fabric samples confirmed that T4L, for the most part, sells fabrics of quality comparable with the lower end of men's clothing. The value of their suits is probably more in the tailoring and convenience of online shopping rather than in the fabric (keep in mind these suits are really cheap). If you're a real miser or simply need a suit but can't afford one, T4L looks like a reasonable option. You can get a 100% wool suit for $240, tailored to fit you better than a regular suit off the rack and with the details of your choosing. Your suit might be a little thin and lack durability because of the lightweight wool they use, but it'd be wool nonetheless and wouldn't have the cheap, somewhat shiny appearance of polyester. If you don't mind the look of polyester and don't need much when it comes to alterations, then you might as well go for that instead. A cheap polyester suit from a bottom-end menswear retailer will be under $200 and it'll probably be a heavier fabric (warmer and more durable, just don't dry-clean too often). If off the rack fits you well enough and you have the patience to find a department store suit on sale for less than $300, you'll probably be better off going that route.

Now shirts are a slightly different story. Shirts are comparatively easy to construct, so even a $20 shirt won't fall apart at the seams on you. You might have to sew on a button or two, but that's easy enough. To take in a shirt from the sides would cost around $25 here, plus another $25 to narrow the sleeves. Assuming that T4L sells shirts using the same kind of fabrics, buttons, etc. as you'll find in the $20 button-down from Costco, you still come out ahead by choosing T4L if you're of slender build (unless you like your shirts billowy).

Overall, I've been unimpressed by T4L and have decided that I will never buy a suit, jacket, waistcoat, overcoat, or trousers from them. However, I had a credit to use (for buying the fabric samples) and thought I might as well try a shirt. As I mentioned above, shirts are relatively expensive for me to have altered to fit and are probably harder for T4L to screw up, so I decided to hand over another $47 for a fitted blue dress shirt. The shirt that I ordered will be reviewed in part 3.