In this post on Gambling and Expected Value, we look at two more "Pick" lotteries, Pick 2 and Pick 4.
Click here to find similar posts on other lotteries and games of chance.

Pick 2 is a lottery offered by the Ontario Lottery and Gaming Corporation (OLG).

The player chooses two numbers from '0' to '9'. Numbers can be repeated, so there are 100 possible selections. Players win if their selection is an exact match to the winning draw (i.e. match both numbers in the same order). A secondary prize is offered to players who match only the first digit (also in the same order).

Note: This game costs $2 to play, but for analysis it's convenient to normalize prizes to dollars won per dollar wagered. It gives us a consistent basis to compare different lotteries or games that have varying minimum wagers.

The expected value of Pick 2 is the weighted average value of the monetary gains or losses incurred from playing. That's pretty straightforward in Pick 2 because there are only three possible outcomes with only one way to play the game. Multiply the net gain from each outcome by the probability of that outcome, then sum for all outcomes. Keep in mind that the cost of playing must be subtracted from the winnings in order to calculate net gain. The expected value, expressed in dollars per dollar wagered is:
(48.50)×(1/100) + (0)×(9/100) + (-1)×(9/10) = -0.415
This means that, on average, you lose 41.5 cents for every dollar wagered playing Pick 2. Better for your bank account than playing the WCLC's version of Pick 3, analyzed previously, but still a fairly efficient way throw your money away.

Pick 4 is also a lottery offered by the OLG.

Similar to Pick 2, the player chooses numbers from '0' to '9' (four choices this time instead of two). Numbers can be repeated, so there are 10,000 possible selections. There are two ways to play: Straight and Box. In Straight play, the order of the digits matters. The player must match the winning numbers in the same order in order to win.

In Box play, the order of the digits doesn't matter, just their values. 1334 is a match to 3341 in Box play, but not in Straight play. The benefit is that you increase your probability of winning in Box play, but the drawback is that the prize is reduced accordingly. Within Box play there are four possibilities, depending on the player's digit selections: 4-way, 6-way, 12-way, and 24-way. 4-way means there are four unique ways to arrange the four digits, which means there are only two unique digits (one of them is repeated twice; e.g. 1222). Likewise, 6-way, 12-way, and 24-way mean 6, 12, and 24 unique arrangements are possible. 6-way means there are two sets of digits that are the same (e.g. 1212). 12-way happens with three unique digits (one is repeated; e.g. 1231) and 24-way happens with four unique digits (e.g. 1234).

The various prizes available in Pick 4, and their respective probabilities, are summarized in the table below. 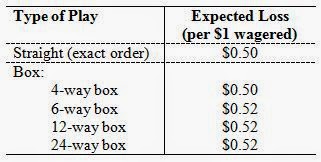 From the expected value we can draw the following conclusions:
Posted by alohonyai at 20:52 No comments:

Gamblers have many options available to them, but by and large the typical gambler knows little about how games of random chance work or how to assess the difference between various gambling options. This is the first of several posts to describe and analyze various ways to gamble. Here we'll be looking at the Pick 3 lottery offered by the Western Canada Lottery Corporation.


Click here to find similar posts on other lotteries and games of chance.

The player chooses three numbers from '0' to '9' and the numbers can be repeated. Therefore, there are 10³ = 1,000 possible selections. From there, there are three ways to play the game: Straight, Box, and Straight/Box. In "straight" play the order of the digits matters. The player wins if his/her numbers are an exact match to the numbers drawn (i.e. chosen in the same order), but loses otherwise.

In the table below, the possible prizes and their probabilities have been summarized for all possible ways to play Pick 3.

They all bet $1. The winning numbers drawn are 123. They are all winners, but with different prizes.

What do the numbers tell us? First, it tells us that the Pick 3 lottery is a pretty bad way to gamble as far as gambling goes. On average, you're losing more than half your wager every time you play. Second, all three ways to play have roughly the same expected value, so there isn't a big difference to your pocket in the long run. However, Box play is the worst choice by a small margin, followed by Straight/Box. If you're going to play Pick 3, you'll lose less money in the long run if you always choose the Straight play option.

The Birthday Problem: Round 4

Matches to your birthday will follow a binomial distribution, which has a probability mass function:


Subtract from 100% to get the probability of at least one match to your birthday within k days among a total of n people. After simplifying, we get Equation 3:

Plotting for different values of k and n (k = 0 if you're looking for a same-day birthday match) gives a graph like this: 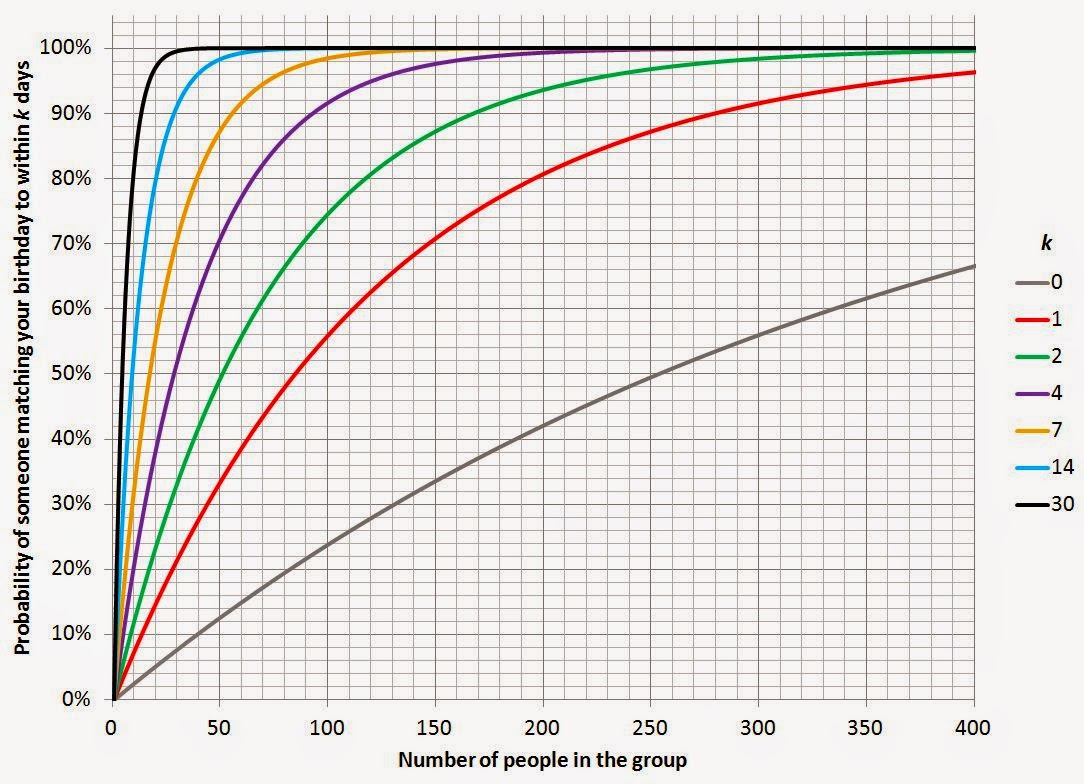 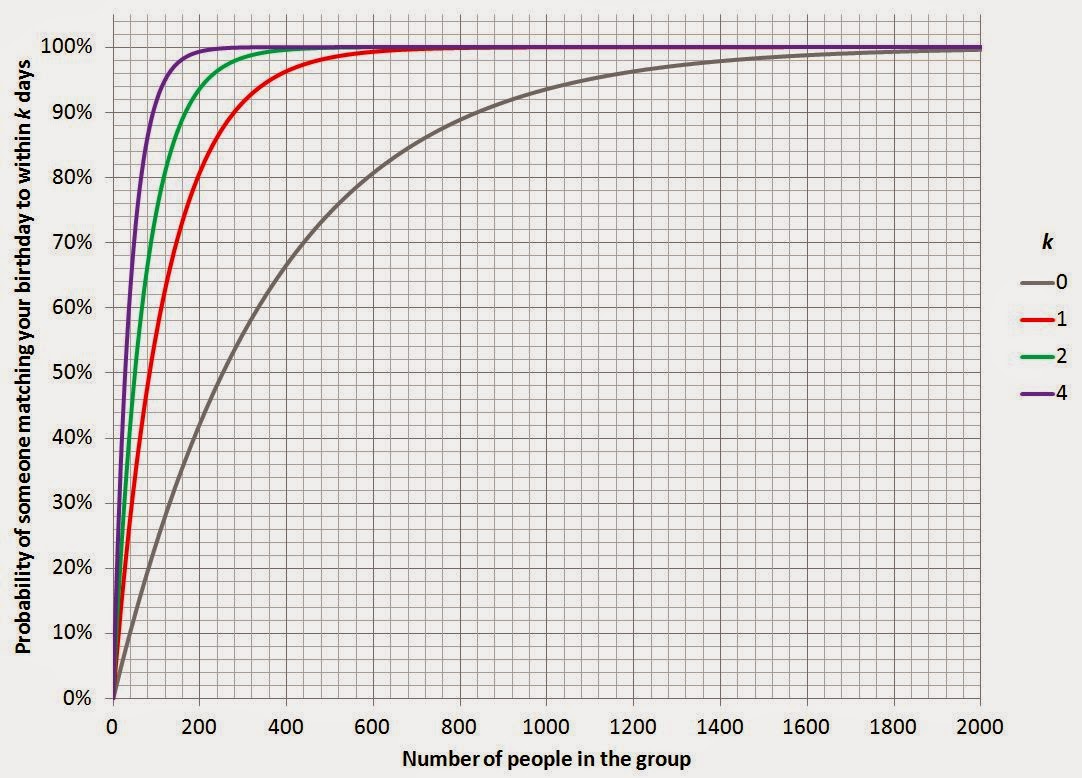 We can also make a table showing the minimum size of the group for a corresponding probability that your birthday will be matched or nearly matched:

As you can see, matching your birthday is far less likely than matching any birthday. The results might be surprising though. Recall that we need only 23 people for there to be better than a 50% chance that two people in the group had matching birthdays. But in a group of you and 22 other people, there's only a 5.86% chance that your birthday is shared with someone else in the group. You need at least 253 other people in the group before it is more likely than not that your own birthday is shared with someone else.


It can be shown that Equation 4 is maximized by n = 1, irrespective of k. Therefore, the first random person joining you at the party is the most likely person to match your birthday, with a probability of a match simply equal to:

For completion, here is the plot of equation 4 and the tabulated data to show the probability of the first person entering the group after you matching your birthday. 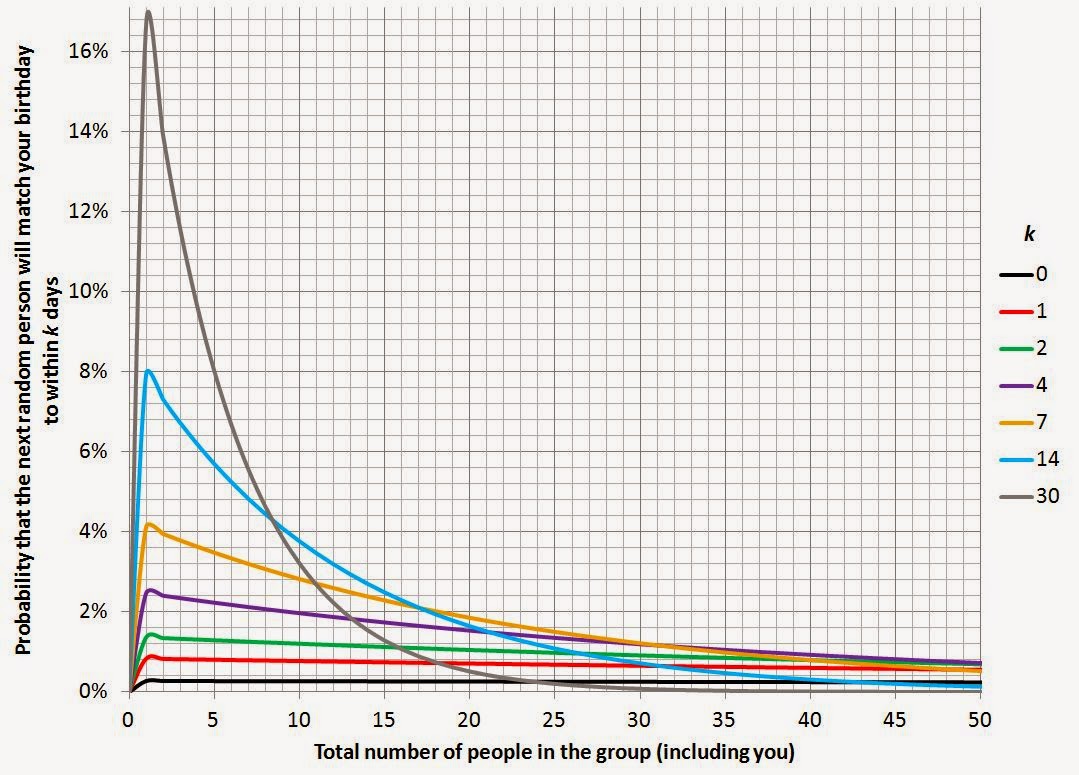 In short, matching a specific birthday in a random group of people is uncommon and generally requires a large sample, but it's not unusual for any two people in a small group of random people to share a birthday. And now there will be no more talk of birthdays for a long time.
Posted by alohonyai at 10:14 1 comment:

Another Variation of the Birthday Problem

The probability of there being a shared birthday among a randomly selected group of n people can be calculated from the expression below:


Suppose now we add one more person. The probability of there being a shared birthday in a group of n+1 people is:

Now if we want to know what value of n maximizes this probability, we can plot the function to find out. I've done that here: 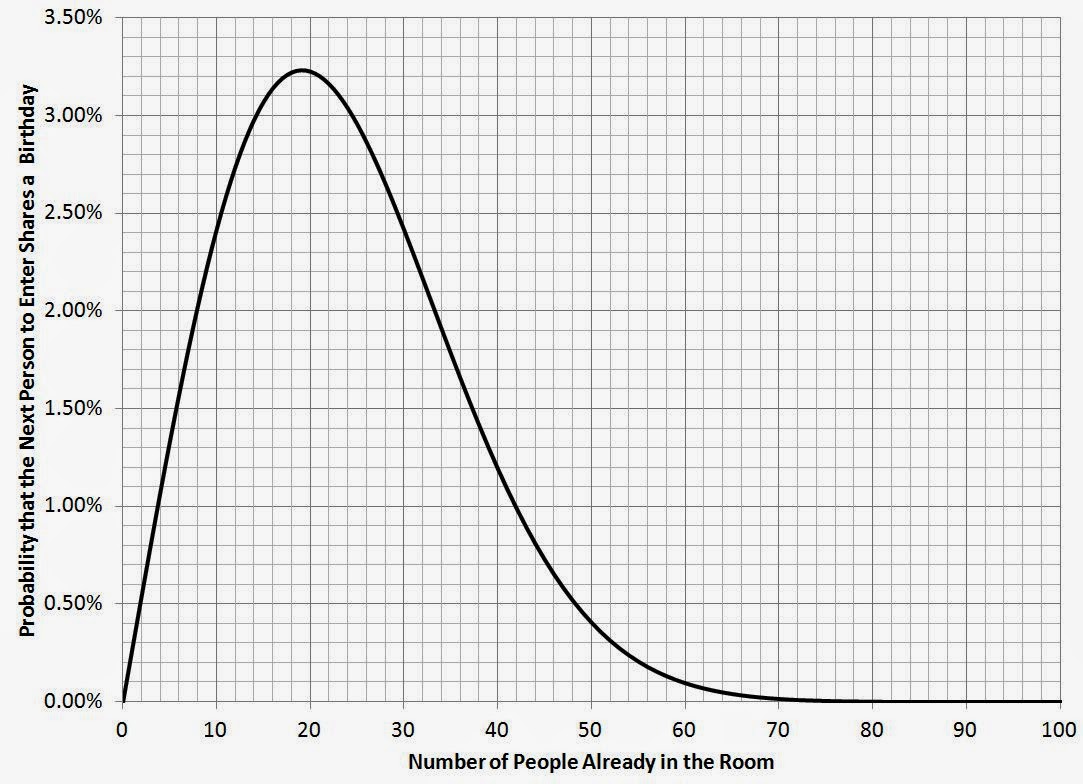 The peak is at n = 19. So, at 3.23%, the 20th person to enter a random group of people has the greatest chance of being the first one to share a birthday with someone already in the group.


And in a group of n+1 people, the probability is:

Just as before, we can subtract Equation 4 from Equation 5 to get the probability that the (n+1)th person is the first person with a birthday close to one already in the group:

Plotting this beastly looking function will allow us to see which person entering the room is most likely to be the one having a birthday close to a birthday of a person already at the party. 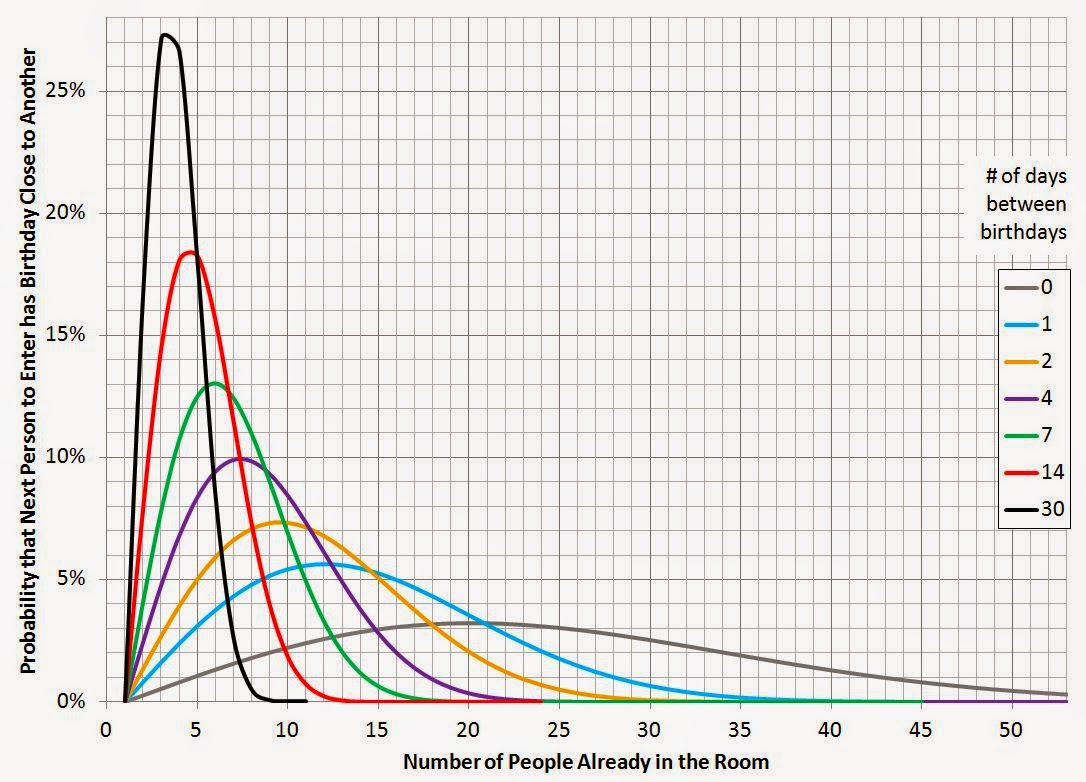 The table below summarizes the information from all the peaks in the above figure.

Posted by alohonyai at 09:30 No comments: